From the July 11, 2003 print edition
Adam Kress
The Business Journal

Few associate the automobile repossession business with high technology, but a Valley man has revolutionized his business with exactly that.Walt Camping did something that few similar companies have been able pull off. He turned his low-tech business, Camping Cos. Inc., into one driven by the convenience of high technology. Technology has allowed his company to grow at an astounding rate and begin what may be a revolution in the repo business.

All it took was some Internet-based software and someone willing to take a chance. But for Camping, there was no reason to be afraid of new technology. In fact, it was a godsend.

"In September of 2000 we could not physically open any more offices because of all the paperwork," he said. "This is a very paper-intensive business and we had to either make a change or stay put. We created a wireless Web-based software that has taken us completely paperless." 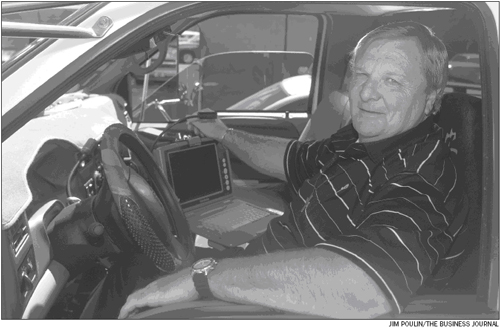 Camping, the company's chief executive, said while debating a change he hired a company to evaluate how the repo business handled all the paper. The results opened his eyes. After a request for repossession would come in via fax, it was discovered that paper was moved at least 64 times -- and that was on a simple case.

Camping Cos.' system, called Re-Pros, hasn't even been up and running for a year, but the results have been so astounding that Camping said a second version will be in place by the beginning of 2004 with the help of a local tech company.

"The old way, you had to wait for drivers to get back to the office to send them out again with all the details," Camping said. "But now with computers with them, they don't have to waste that time anymore. I never even see my drivers in the East Valley anymore. And the quality of life and salary of the drivers has gone way up. Everyone is more efficient."

Camping, who has lived in the Valley for 41 years, is a former Phoenix police officer and founded Camping Cos. with two of his sons in 1989. He said the repossession industry has historically been littered with bad communication and a lack of trust, and he designed his company to overcome those stigmas.

Bill Kickliter, a repo coordinator with Chase Financial in Tampa Bay, Fla., works first hand with more than 300 repossession agents across the country, and without a doubt calls Camping the best to work with.

"Their system is phenomenal," he said. "In this business you are always at risk of wrongful repossessions, but with their technology that's almost totally eliminated. If I get in a late payment after the repo has been ordered, I can go into their system from Tampa Bay and cancel it before the driver gets there."

Kickliter said only a handful of repo companies in America use this kind of technology and no others in Arizona.

"There is nothing as sophisticated as they have," he said. "They dominate Arizona because no one else there is using that kind of technology.

"In this business time is money, and they save a lot of mistakes and a lot of time."

Camping Cos. has five offices in Arizona, two each in Colorado and Nevada, and single offices in Utah and Oklahoma. But Camping hopes to expand his company and technology throughout the West.

"In the next five years we hope to open 20 new large offices in the West," he said.

Better communication, with the help of technology is what is putting him ahead of the competition.

"Lienholders have always wanted more frequent and better updates, and that's what we are giving them," Camping said.

"We are a no-tech business and technology has taken us extremely forward," Camping said. "We've gotten a 50 to 60 percent increase in productivity from the same number of employees."

And with the help of AppsCafe, the technology is about to get even better. The Phoenix software development and implementation firm is designing a new version of software the company will use by the end of the year.

Tucker said this is a cutting-edge project for his company, and one that few others are duplicating on such a wide-ranging platform.

"This will strengthen their relationship with lienholders, and it's designed from the ground up with the ability for the company to easily expand within the system."

Todd Bankofier, president of the Arizona Technology Council, took a tour of Camping Cos. to see firsthand what companies are capable of when they use technology to their advantage.

"There still are a number of companies that have not taken that positive step forward with technology, but we're starting to see more and more non-tech companies embracing it," Bankofier said.

"Here's a guy (Camping) in the most low-tech industry I can imagine, and he knows that you don't have to have a tech company to embrace technology."